Rare first and only Latin editions (probably the first and only early editions in any language) of four closely related polemical pamphlets on European policy toward the Ottoman Empire. The publication was instigated by the prominent Nuremberg poet and jurist Georg Philipp Harsdörffer (1607-58), who somehow found access to the French manuscripts of the pro-Richelieu "Peristromata Turcica" (Turkish carpets), and the anti-Richelieu "Gallia deplorata", translated them into Latin, edited them for publication and added what is believed to be his own anti-French Latin rebuttal of the former, "Germania deplorata". On 26 November 1641 he sent all three to the Calvinist Prince Ludwig of Anhalt-Köthen, founding president of the Fruchtbringende Gesellschaft in Weimar, who found the "Peristromata Turcica" shocking and dangerous, not only for its content but also because its remarkable and "seductive" graphic form. At a spring 1642 meeting of the society Ludwig initiated the writing and production of an emblematic rebuttal, the "Aulaea Romana" (Roman tapestries). Besides the political importance of these pamphlets as records of differing European attitudes toward the Ottoman Empire, they are remarkable graphic and typographic artefacts, early examples of colour printing and important emblemata. In 1536 Francois I had formed an alliance with the Ottoman Emperor Suleiman the Magnificent, and for a century Franco-Ottoman relations swung between extremes. Around 1626 Cardinal Richelieu began to encourage noblemen to strengthen France's economy by expanding its maritime trade in the Middle East, Near East and beyond. But with its great maritime power, the Ottoman Empire was not only a potentially valuable trading partner but also a fierce competitor and even a military threat to Europe's trade in those regions. Richelieu therefore attempted to form a Catholic union with the Holy Roman Empire and others to fight against the Ottomans. With owner's inscription of the lawyer and diplomat Georg Achatz Heher (1601-67) and bookplate of Robert Hoe (1839-1909), one of the greatest book collectors of all time. With the last quires (E-H) of the "Aulaea Romana" misbound following the last quire (G) of Gallia. A small marginal worm hole in the first work and the first leaves of the second, and an occasional small marginal chip or tear, but still in good condition. The binding with cracks in the hinges and some wear at the extremities, but otherwise good. Although these four editions were clearly designed to be published together, only about a dozen complete sets are known to survive, nearly all in Germany, Austria and Poland. 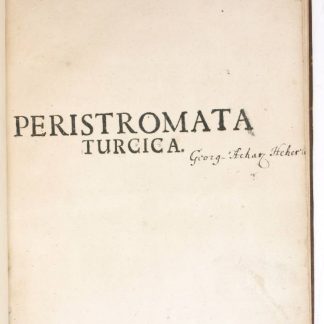