Precursor to the "Encyclopédie"

8vo. 8 vols. With engraved frontispiece and a total of 130 folding plates (several in the 6th volume loose). Contemporary marbled boards with giltstamped spine labels. All edges sprinkled in red.

Final, most extensive edition of this compendium of 18th century science, compiled by the naturalist Gianmaria della Torre (1710-82), a Somascan Father and professor of physics in Naples. The first two volumes treat general physics, the others are dedicated to special fields, including thermometry, geophysics and minerals, metals, magnetism, earthquakes and volcanism, electricity, hydrophysics with rivers and ice, hydraulics as well as navigation; botany, animal life, the human body, anatomy; atmospheric phenomena and the perception of sound, light, colours, optics, etc. Of particular interest are the numerous engraved illustrations, showing not only instruments and experiments, but also maps of the Old and New World (Europe, Africa, Asia, America), the Torne River on Finland's Arctic Circle, the English Channel, crystals, volcanoes (with several views of Vesuvius and its latest eruptions), pumps and pumping stations, diving bells, etc. "Della Torre was a man of wide culture and of wide scientific curiosity. His studies led him into the history of philosophy, optics, and microscopy [...]; in addition, he observed and recorded eruptions of Vesuvius [... His] most important work, however, was as an encyclopedist. His two-volume work, 'Scienza della natura' (Naples, 1748-1749; [...] a considerably enlarged Neapolitan edition appeared in 1767-1780 as 'Elementa physicae'), anticipated the more famous 'Encyclopédie' the publication of which began in 1751. [... Della Torre's 'Elementa'] presents a complete and ordered picture of the state of scientific knowledge in its time. Although Della Torre's work is almost forgotten today, he was strongly influential in establishing the scientific climate of 18th-century Italy" (DSB).

Bindings rubbed and bumped; variously brownstained and waterstained; a few plates loose; unappealing old collector's stamps to title pages. Almost never encountered complete (as thus): no copy in auction records internationally; even libraries rarely hold more than four or six volumes, while the eighth and last volume is almost never present (nine-volume sets - such as those in the libraries of Benevento and Veroli - collect all the illustrations into a single volume of plates). 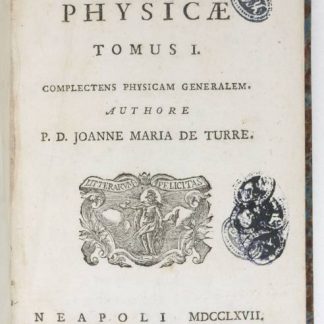