The first printed eyewitness account of any place in today's UAE

Excessively rare first printing of Hieronymus Megiser's German translation: Ludovico di Varthema's famous account of travels to Arabia, Syria, Persia, Ethiopia, India and the East Indies; a highly important and adventurous narrative including the first printed eyewitness account of any place in today's United Arab Emirates. On his return journey from Mecca (which he was the first Westerner to describe), Varthema visited Ras al-Khaimah ("Giulfar") and portrayed the city as "most excellent and abounding in everything", with "a good seaport", and whose inhabitants are "all Muslims". While Montalboddo's famous anthology of discoveries, printed in 1507, contained the first printed reference to the Arabian Gulf region, it was Varthema's work, published only three years later, that offered the first actual report from the region by a Western traveller who had visited the coast. "Varthema's Itinerario, first published in 1510, had an enormous impact at the time, and in some respects determined the course of European expansion towards the Orient" (Howgego). The 1510 edition, published in Italian at Rome, had no illustrations. The illustrations in this early 17th century edition include a map of the Arabian Peninsula as well as a separate one of only the Gulf (both identifying "Catura", i.e., Qatar), a view of Aden, riders on Arabian horses, a view of Damascus and the Arab costume as worn in Syria, an elephant, etc.

Ludovico di Varthema or Barthema (ca. 1468-1517) sailed from Venice to Egypt in 1502 and travelled through Alexandria, Beirut, Tripoli and Aleppo, arriving in Damascus in April 1503. There he enrolled in the Mameluke garrison and proceeded overland to Khaybar, Medina and Mecca, thereby becoming the first European to enter the two holiest cities of Islam. His travels took him further to South Arabia, Persia, India, Goa, Cochin, and supposedly the Malay isthmus, Sumatra, Banda, the Moluccas, the Spice Islands, Borneo, Java and Malacca. It has often been suggested, however, that he never came further east than Ceylon and that the account of the rest of his journey was assembled from stories passed on by others, but even in these regions much of his information appears to be accurate. Thanks to his knowledge of Arabic and of Islam, Varthema was able to appreciate the local culture of the places he visited. Impressed and fascinated, he describes not only rites and rituals, but also social and geographical aspects and details of daily life. He gives a detailed description of Mecca and the Islamic pilgrimage, and his description of the Hejaz (the west coast of Arabia on the Red Sea, including Mecca and Medina) is especially valuable as it pre-dates the Ottoman occupation of 1520. He finally returned to Lisbon in 1508.

Varthema's account became a bestseller as soon as it appeared in 1510 and went through about twenty editions in various languages in the next fifty years. It certainly provided many Europeans with their first glimpse of Islamic culture and of non-European cultures in general. This first edition of this translation is so rare that Röhricht doubted its existence. 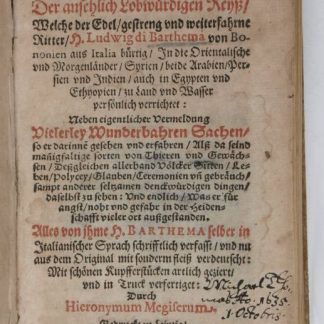