The most important voyages from the 15th to the end of the 17th century, including the first edition of Balbi's travelogue to the Middle East in Folio

The work is falsely attributed on the title-page to Johan Lodewijk Gottfried, by Van der Aa, most likely because he made good money publishing Gottfried's "Chronicle" in 1702. In reality Gottfried had nothing to do with the present work. The work was edited and co-published by Pieter van der Aa, known for his ambitious projects. Where other publishers were primarily concerned about the profits, Van der Aa wanted to publish outstanding books. For the present series of travels he either reused and revised older Dutch translations or had the original accounts translated for the first time into Dutch. In 1706 he already started publishing the translated voyages both in small (8vo) and large instalments (folio or 1mo), and a year later he published a 28-volume set of the 8vo editions. The folio editions were afterwards issued and divided in four large collections of two volumes each. The present issue, is a reissue of these four collections with their own independent title-pages and frontispieces, and ads a new general title-page and list of subscribers.

While all sets seem to be described as "folio" the present set is printed mainly as 1mo, with some occasional quires in folio. And as the large editions of the two volume sets were available on normal paper (80 guilders) and on large paper (100 guilders; Hoftijzer, p. 43), it seems very likely the present set is one printed on large paper. All leaves are unwatermarked and the 1mo leaves are only slightly trimmed (measuring 396 x 238 mm with the tranchefiles often still visible) the folio leaves are trimmed more and don't have visible tranchefiles. The fourth volume is from a different set which is trimmed down much more, but also combines both 1mo and folio leaves.

Some occasional spots, a couple minor restorations and a few wormholes; a very good set, but with the fourth volume from a different and heavily trimmed set (though printed on the same large paper), in a modern binding and lacking the frontispiece and the title-page to the volume. The seven volumes with contemporary bindings slightly worn along the extremities and with some minor wear on the sides, but otherwise very good. 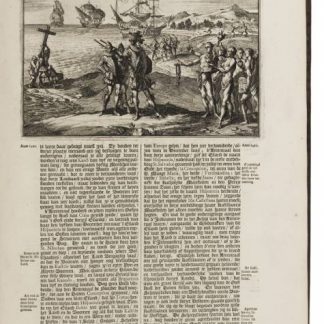