The first series is a radically revised version of Dijian tushuo, designed to appeal to educated Parisians. The Dijian tushuo, known in English as The emperor's mirror, was a very popular Chinese work with stories and illustrations of the praiseworthy and blameworthy actions of Chinese emperors, originally composed for the instruction of the young Wanli emperor. A manuscript version of this work was sent to the French minister of finance Henri Bertin, after which Helman modelled his edition. Besides reframing the Chinese historical anecdotes for a French audience, Helman also completely reconceptualised the illustrations. Although Helman intended to publish four instalments, only the present first instalment appeared. "Published in Paris just a year before the French revolution, perhaps the volume was meant as a veiled criticism not only of Louis XVI's policies but also of his wife, Marie-Antoinette" (Reed & Demattè).

The second series is also based on a collection of drawings from the library of Bertin, who had received these from the French Jesuit missionary Joseph-Marie Amiot. Amiot wrote a lengthy biography of Confucius, which was published as "Vie de Koung-Tsée, appellé vulgairement Confucius", together with the engravings by Helman, in 1786, simultaneously with the first impression of the present print series. The accompanying text to the plates are short "morales de Confucius" from the "Collection des moralistes anciens" (1782).

As stated on the title-page, part 1 could be purchased unbound, at 12 livres; in paper wrappers, at 13 livres and 10 francs; unbound on wove paper for 18 livres; on large paper to accompany the Batailles de la Chine and hand-coloured on "papier de Hollande". Both series are here printed on wove paper, and part 2 (usually dated 1786) is, as such, clearly issued together with the other in 1788.

Isidore-Stanislas Helman (1743-ca. 1810), a student of Le Bas, was a successful engraver in service of the Duke of Chratres. In 1785 he had reproduced a then already extremely rare print series illustrating Chinese battles, that was commissioned by the Emperor of China in France. Helman would later engrave the major events of the French Revolution.

A couple of occasional spots and some very minor foxing in the upper margins, otherwise a very good copy. The binding has some minor wear along the extremities of the spine, but is also very good. 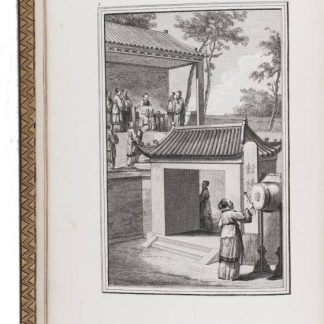