One of the very rare large paper copies of the first and only editions of the Dutch translation by Jacob van Ekers of Niebuhr's famous account of a voyage to Arabia and surrounding countries (ad 1) and his description of Arabia, Egypt and the Middle East (ad 2). Both works were originally written by the Danish traveller and surveyor Carsten Niebuhr (1733-1815) and published in German, in Copenhagen in 1772 under the titles, "Beschreibung von Arabien" and "Reisebeschreibung nach Arabien und anderen umliegenden Ländern". Both works were also translated in French and English.

In 1760 Niebuhr was invited to join a scientific expedition to Egypt. Other members of the expedition were Friedrich Christian von Haven (a Danish linguist and orientalist), Christian Carl Kramer (a Danish physician and zoologist), Georg Baurenfeind (an artist from southern Germany), Berggren (a Swedish ex-soldier) and Pehr Forrskal (a Swedish botanist). In January 1761, the expedition sailed from Copenhagen, Denmark to Alexandria, Egypt. The members of the expedition spent a year in Egypt, visiting Suez and Mount Sinai. They left Suez in October 1762 and sailed to Yemen. In May 1763 they reached Mocha where Von Haven and Forrskal died from malaria. In August 1763 Baurenfeind and Berggren died, followed by Kramer in February 1764. Niebuhr was the only one left to continue the expedition. In 1764, he explored India, sailing from Bombay to Muscat, as well as Shiraz, Babylon, Baghdad, Mosul, and Aleppo. He spent some time in Persepolis in 1765 where he has made very detailed drawings and maps, which were used for more than a hundred years. In 1766, he explored Palestine before finally returning to Copenhagen on 20 November 1767, after a journey of seven years. When he returned to Copenhagen the Swedish government warmly welcomed him and paid the costs of engraving the plates to illustrate his accounts of the voyage. Both works are lavishly illustrated, having together 2 large maps of Yemen and 148 beautifully engraved maps, plans and views of all the regions Niebuhr visited.

The present set has both works printed on the same large watermarked paper (Strasbourg bend above VDL) and is only slightly trimmed, measuring 296 x 242 mm with the tranchefiles still visible (regular copies are printed on unwatermarked paper measuring 275 x 217 mm). Not even Tiele mentions the existence of copies on large paper.

Binding slightly rubbed on the sides and rebacked as noted; otherwise good. With a few occasional spots, the half-titles slightly thumbed and a few mm of minor browning in the upper margins; a very good large paper copy, only slightly trimmed. 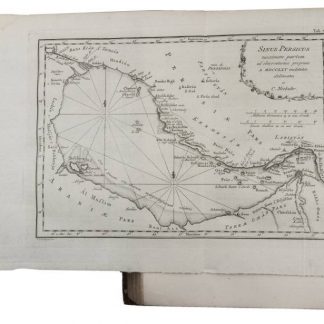