The 24 pt Syriac "serto" types were cut in 1590 by Jean Cavaillon for the Medicean Press. In the beginning a Syriac alphabet is presented, in three different scripts: "estrangelo" (this word possibly here used for the first time), "serto", and a Nestorian script possibly in type. This Nestorian script, a cursive form of estrangelo, is introduced here for the first time. In 1633 a slightly different type-face was used for Bellarmino's Catechism.

Some browning and brownstaining throughout, as common; the first few quires loosened. 18th century library stamps to title page; bookplate of Flavio Camillo Borghese, Prince of Sulmona (1902-80), on pastedown. Quite rare; a second edition, supposedly produced in 1645 (cf. Nasrallah, p. 10), is not attested in libraries. 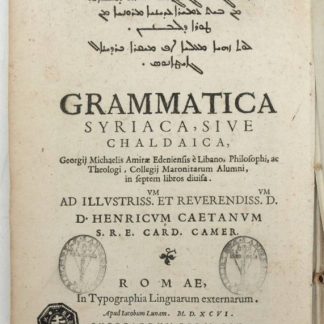