The first oriental manuscript to be reproduced in facsimile: an Iranian calendar with Turkish commentary, from Weikmann's Kunstkammer

First facsimile edition of any oriental manuscript. 16 of the 22 finely engraved plates show a Persian perpetual calendar with Ottoman Turkish "commentarius" and floral borders. Welsch had acquired the ms. from Christoph Weikmann's Kunstkammer in Ulm. The remaining six plates are concerned with Arabian astronomy: astrolabe, orrery, zodiac, circular table of Sundays and names of the months in various languages.

The calculation of this calendar is today attributed to the 9th-c. Persian mathematician Wafâ al Buzjâni (cf. BSB München; Humboldt-Universität Berlin). The predominant attribution to one Turkish Sheikh Wafâ had been disputed by Babinger as early as 1927. Abu'l-Wafâ al Buzjâni is regarded as "the last great representative of the mathematics-astronomy school that arose around the beginning of the ninth century, shortly after the founding of Baghdad" (DSB I, 39). His astronomic oeuvre is preserved merely in fragments. The calligraphic commentary, however, is Turkish and (according to Babinger) was prepared by a 17th-c. magistrate, 'Ajn-i 'Alî Mueddinzâde.

Welsch (1624-77) was a physician and "a researcher of the very first magnitude [...] while the works of this polymath were mainly dedicated to the Arabian and Persian sciences, he also has provided proof of his close study of Ottoman Turkish. In this connexion, his important 'Commentarius in Ruzname Naurus' must be cited" (cf. Babinger 1919). Welsch's "Dissertatio" (with Arabic typeface) is aimed at the usefulness of the calendar for relative oriental chronology: he also compares the works of Schall von Bell and Andreas Müller on Chinese astronomy and chronology. 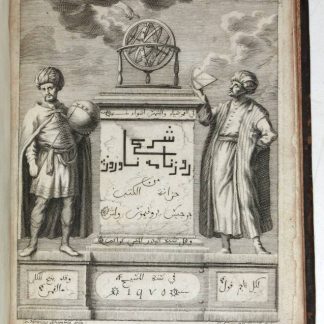