To the 1st Earl of Shelburne, regarding the health of his son Thomas, then Smith's student and lodger: "My Lord / It gives me as much pleasure to write to your Lordship today as it gave me pain to write to you by last post. The Doctors Predictions have upon this occasion been literally and exactly fulfilled. Mr. Fitzmaurice had the inght before last a very slight attack of his fever which he was relieved from by a gentle sweat; and last night he had a bleeding at the nose which Dr. Black regards as a perfect crisis. He has since been entirely free from all feverish ailments or symptoms [...]". Written in ink in a neat cursive hand, approximately 23 lines to the page, with a few corrections in the text, addressed on the verso of the second sheet, annotated: "Mr. Smith concerning my son Thomas’s health". Sometime folded for posting, some light soiling along the folds. 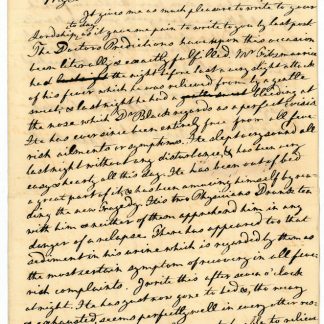