Very rare first edition of this defence of the Holy Roman Emperor Charles VI against the aggression of the King of Spain, Philip V. Although written in Italian, it was printed in Vienna by the Imperial Printer, Johann Peter van Ghelen (1673-1754), and was apparently composed as a reply to a pamphlet known to be circulating which sought to justify Philip's actions during the War of the Polish Succession (1733-38).

The anonymous (Austrian?) author of the present work calls that Memoria little more than Spanish propaganda: "tutta la Scrittura non e altro, che una tessitura di espressioni offensive, d'ingiurie, di oltraggi, e di calumnie...". He begins by defending Austria's actions in the earlier War of the Quadruple Alliance (1718-20), in the name of the "love of peace and justice". Much of the discussion centers around Count Philip Joseph Kinsky, the Austrian ambassador to London; it was a sore point for the Austrians that their old allies, the British, had refused to come to their aid in 1733.

The original pamphlet appears to have first been published in Spanish under the title "Noticia al embaxador del Rey Catolico" (s.l., s.n., 1733). It was quickly translated into Italian - perhaps as a lingua franca - and appeared (according to the present work) in printings in Rome, Florence, and Germany under various titles.

The War of the Polish Succession pitted Spain and France against Austria and Prussia in an attempt to shift the balance of power among the reigning European superpowers. The Treaty of Vienna (1738) marked the end of hostilities.

OCLC shows one copy in Barcelona, one in Berlin, and two copies in Italy. No copy is recorded in the ÖNB or the ÖBV. A very good copy, clean and fresh. 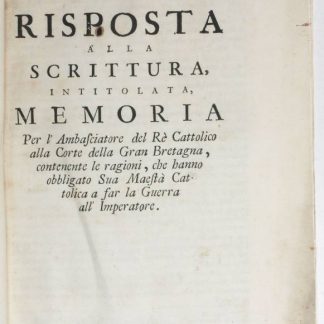