First edition of Hus's principal work, commonly known in English as "Treatise on the Church", ascribed to Adam Petri's Basel printshop on the basis of typographical features. Written in 1413 at the castle of one of Hus's protectors in Kozí Hrádek, near Sezimovo Ústí, the book evidences the author's strong intellectual and spiritual ties with the English reformer John Wyclif, whose like-titled "De ecclesiae" has been written in 1378 (Hus however, unlike Wyclif, did not reject the notion of transsubstantiation). "This treatise became Huss's 'apologia pro sua vita', the defense of the views which he had drawn from Wyclif and advocated. [... It] has a place of first importance among works on the church [...] It is the best known work on the subject issued from Augustine to the Reformation period [and] has had a permanent influence upon the development of the idea of the church" (Schaff, Introduction to the 1915 edition, p. xi-xxxi).

A little more than a century after Hus was burned at the stake in Constance, Luther was sent a manuscript copy of the work and, upon reading it, enthusiastically embraced Hus's central tenets, famously writing to Georg Spalatin in February 1520 that "without knowing it, we are all Hussites". But half a year later, two printed versions appeared almost simultaneously in 1520 - one under the original title used here, the other entitled "De causa Boemica" (printed by Anshelm in Hagenau; the precise order of publication remains unclear). These first printings "enabled others to evaluate (or even emulate) Luther's conclusion [... The text was presented] in a disinterested manner, thus allowing an unbiased judgment of its contents"; it was published without polemical introduction or prologue, and the title page, "which did not mention Hus by name, contained the simple epigraph: 'I beg you, my kind reader, to attend not to who speaks, but to what is said'" (Haberkern).

Occasional slight brownstaining; a few insignificant wormholes to blank lower margin near end; old library shelfmark in ink to front pastedown. Quires M and Q bound out of order (3-4-1-2), but a complete, well-preserved and wide-margined copy. Quite scarce: only three copies in auction records internationally since 1975. 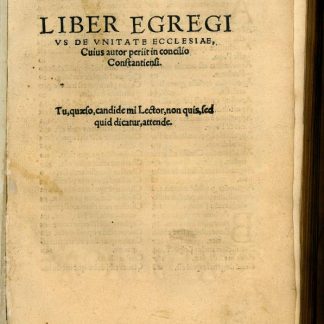