The vivid images depict stages in the Chinese production process for tea, from preparing the ground for planting to packing tea chests for export. These images were produced in large numbers in the port of Canton, China during the second and third quarters of the 19th century. Made primarily for the export trade, they are mostly the work of anonymous artists. Although they may resemble enamel paintings, they are actually watercolours on pith paper. Pith is not manufactured, but derived by cutting the inner spongy tissue of a small tree, Tetrapanax papyriferum, which is indigenous to southern China and Taiwan. Most pith paper watercolours, like these examples, are unsigned, though the majority are known to have been produced in Canton where numerous workshops existed. Individual images were often pasted into 19th and early 20th century Australian scrap albums, but it was common to buy the images in sets of 11 or 12, bound into albums with silk brocade covers. The pith paper was supplied held in place on a backing sheet and usually surrounded by a silk or paper ribbon.

With stamp of the "Pakhuismeesteren van de thee Amsterdam" on front flyleaf. Boards chipped and frayed with some loss to silk covers. Some paintings with some minor cracking. 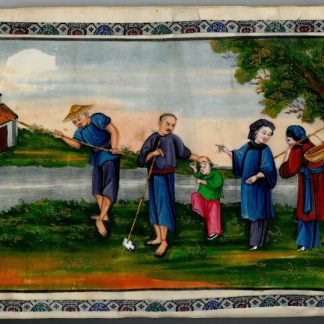