Folio (229 x 296). 10 vols. With a total of 603 engravings, mostly on plates (some folding) and others in the text (many with tissue guards), many printed in sepia and some in several colours. Contemporary red half calf with gilt spines.

Second French edition, vastly expanded from (and much preferable to) the first, which had appeared in 1781-1803 in a mere four volumes. The set is considered one of the finest illustrated works of its time. It was in 1775 that the Swiss poet and theologian Lavater (1747-1801) had first gained widespread fame as well as notoriety through his "Physiognomische Fragmente zur Beförderung der Menschenkenntnis und Menschenliebe" (published in English as "Essays on Physiognomy" in 1789). His instructions on how to recognize traits of character by facial and body features contributed to the popularity of silhouette portraits in Germany during the second half of the 18th century. His theory of physiognomy - which he had first set out in 1772 in a slender volume - was vigorously discussed by contemporaries, among them Lichtenberg, Goethe, and Humboldt. Famous artists such as Daniel Chodowiecki, Johann Rudolph Schellenberg and Johann Heinrich Lips supplied him with illustrations.- Slight browning and brownstaining; the appealing bindings show occasional traces of bumping to extremeties. A good, wide-margined copy, including the frequently missing index volume (10) by Sue. 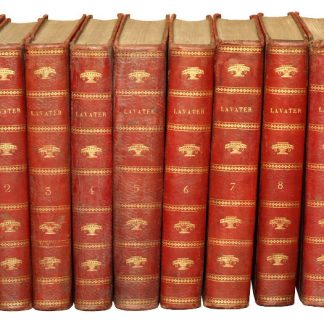