Philantropy and charity in the Middle East and Europe

Very rare first and only edition of the Portuguese translation of a work on charity and philanthropy written by the Moravian count and traveller Leopold von Berchtold (1759-1809). It deals with the history and philosophy of philanthropy, and touches various subjects. There is a chapter on the improvement of the condition of black slaves, closing with a section on manumission, a chapter on prison reform and one on animal welfare. Berchtold also gives examples of charity among various societies, including the Turks, Arabs, Persians and Indians, probably drawing from his own experiences: Berchtold travelled through Europe and the Middle East for 17 years. Apparently Berchtold translated the book himself during his stay in Portugal, since he incorporated his observations on Portuguese charity and apologizes for the imperfections in his Portuguese. The original German work, "Versuch die Gränzen der Wohlhätigkeit gegen Menschen und Thiere zu erweitern", was published in 1789 at Vienna. Berchtold also wrote several other works, mostly travel guides, of which his "Essay to direct and extent the inquiries of patriotic travellers" is his best known.

With the bookplate of "Livraria do Advogado, Abel Maria Jordão Paiva Mano" on pastedown, and a note on the blank final page stating the book was acquired at auction no 212, lot 340 of A[rnaldo] H[enriques] d'Oliv[eira] in October of 1958. Binding worn along the extremities with wormholes in spine. Only slightly browned with some minor foxing. Overall a very good copy. 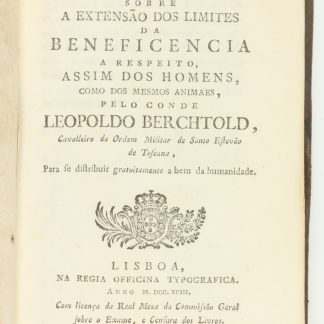