Book seven of Théodore de Bry's "Petits Voyages", the greatest single collection of material on early voyages to the East Indies, which is considered unique in its extraordinary wealth of cartographical and visual material. Crucially, this much-sought volume includes Gasparo Balbi's groundbreaking account of the Middle East, first published in 1590 as "Viaggio dell' Indie Orientali" - a mere 16 years before this present issue, making this the second appearance in print altogether and the first Latin translation. Balbi, a Venetian jewel merchant, travelled extensively in the Arabian Peninsula in search of precious stones. From Venice he sailed for Aleppo, proceeding to Bir and from there overland to Baghdad, descending the Tigris to Basra, where he embarked for India. While in the Gulf, he studied the pearl industry, noting that the best pearls were to be found at Bahrain and Julfar. He refers to islands in the Emirate of Abu Dhabi (including Sir Bani Yas and Das) and to several coastal settlements that were to become permanently established, such as Dubai and Ras al Khaima. Balbi was the first to record the place names along the coast of modern Qatar, the United Arab Emirates and Oman. Practically "none of the names of places on the coast between Qatar and Ras al Khaima occur in other sources before the end of the eighteenth century" (Slot). The volume also comprises the account of Joris von Spilbergen's voyage to Ceylon in 1601-04 (with excellent plates).

Calf slightly worn, some browning due to paper. Title browned in the margins; some foxing to plates. Contemporary ownership inscription of Thomas Knyvett in upper margin of title (partly obliterated by a later owner), dated 27 June 1608; also inscribed "perlegi (I finished reading) 20 Octob. 1608 Tho. Kny." near lower edge of the title. Armorial bookplate and later ownership of "T. Norcliffe" on inside of upper cover. Thomas Knyvet, 1st Baron Knyvet (also Knevytt, Knyvett, Knevett, Knevitt; 1545-1622) was an English courtier and Member of Parliament who played a part in foiling the Gunpowder Plot. Latterly the library of Swedish antiquarian bookdealer Björn Löwendahl (1941-2013). 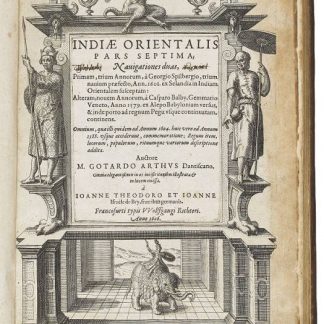