Extremely early example of a banknote, and a specimen of the largest paper money ever issued. The Chinese writing along the top of this Ming note reads "Da ming tong xing bao chao" (from right to left, in regular K'ai Shu style), which translates as "Great Ming Circulating Treasure Note". Below this, the denomination is written in two characters "yi guan" ("one string", then the equivalent of 1000 copper cash or one tael of purse silver or one-fourth tael of gold). Beneath the denomination is a picture of a string of 1000 coins, arranged in ten groups of one hundred coins. Beneath this are the instructions for use and a threat to punish forgers.

Paper very thin and fragile, with some very old repairs, partly faded and with some soiling, some folds. Traces of two faded red (vermilion) seal handstamps, one at each side. As these stamps typically tend to fade with time, they are not easily perceptible. These seals had the function of signatures on modern banknotes. The red imperial seal is applied on the reverse. The outer frame surrounding the text is ornamented with dragon patterns. On both sides of the centre are eight Chinese characters "Ta Ming Pao Ch'ao, Tien Hsia T'ung Hsing" (The Great Ming note, circulates everywhere) in Chuan Shu style.

The 1 Kuan note is the largest paper money ever issued. China was the first country in the world to use paper money (credit currency). The very earliest paper money notes date from the 11th and 12th centuries, but as only fragments of these are extant, they can only be described in very general terms. This kind of note was observed by Marco Polo in the 12th century, and he referred to it as "flying money". The oldest paper money of which a complete specimen survives is that from early Ming dynasty, dated 1375. These notes are the earliest numismatic prints, also the earliest obtainable commercial printing on paper, indeed very nearly the earliest obtainable printing of anything - a full lifetime before Gutenberg. Very few examples survive. 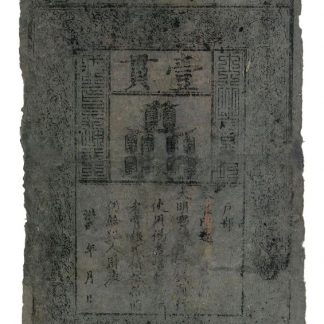