Drawings by the Princess

Clementine d'Orleans, princess (1817-1907), daughter of Louis Philippe, King of the French; married to Prince August of Saxe-Coburg, mother to King Ferdinand of Bulgaria. Sketchbook/scrapbook containing drawings by the Princess and other artists, including sketches by William Daniell.

A magificently bound, early album containing sketches by the artistically gifted princess as well as by other artists. It was not until the year of her birth that her father Louis Philippe, the Duke of Orleans (1773-1850), who had had to leave Europe after the French Revolution and spent several years in America, returned to France, where in 1830 he accepted the crown, following the deposition of Charles X. Until the February Revolution of 1848 and his emigration to England he reigned as "King of the French".

The present album contains three unsigned portrait studies in pencil attributable to the princess, probably based on details from an old master painting (possibly a Crucifixion or Lamentation of Christ). In her youth, Clementine is known frequently to have copied details from Dürer, Michelangelo, Leonardo da Vinci, Holbein, and Titian. Two of the present studies are dated "1831", when she was but fourteen years old: among the earliest of her known works, they show off her remarkably developed talent.

Among the other drawings in the album is a watercolour still life with fowl, signed "D. Pedro 1850" and inscribed, "Offert À Son Altesse Royale Madame La Duchesse de Saxe Cobourg Gotha le 3 Juin 1851", while a similar still life is signed "D. Suid [?] fecit / 20 Set. 1850". Other drawings include four pencil sketches by the English painter and engraver William Daniell (1769-1837), who had accompanied his uncle Thomas Daniell to India in 1784 and subsequently produced a wealth of highly regarded landscapes and scenes of Indian life (including work for the famous "Oriental Scenery" volume), many of which are in the Royal collections (cf. Thieme/Becker VIII, 361f.). His signed contributions are two boating scenes (1827, one entitled "Patience in a Punt"), an Indian riverside scene (1827) entitled "The Plantane tree, Bengal", and an "Indian Bull" (1830, inked and watercoloured). Another particularly finely executed watercolour shows a beach scene at Ingouville (in Normandy), dated August 1839 and signed "L. Laurent". In addition, there are three skilled but unsigned pen-and-ink sketches, apparently also by a trained artist, showing a watchman with a shouldered musket, the Falls of Clyde in Scotland ("Chute de la Clyde / Lanarke 11 Juillet 51"), and the profile study of a lady (all but the latter washed in ink). A few torn stubs show the album to have formerly comprised several additional leaves, while the faint nature-printed impressions left by plants between two leaves prove that the album was once also used to preserve botanical mementos.

The princess grew up in the Palais Royale in Paris. In 1843 she was married to Prince August of Saxe-Coburg; in 1861 she would give birth to Prince Ferdinand of Saxe-Coburg, who in 1887 accepted the crown of Bulgaria, against the wishes of the European Powers and indeed those of the house of Coburg. Having long lived under the same roof with the similarly aged Victoria of Kent, later Queen Victoria (1819-1901), Clementine maintained a lifelong correspondence with the Queen of England, and her more than 600 letters are now in the Royal Archive in Windsor. Also the Hoover Institution at Stanford University keeps material from the estate of Princess Clementine within the so-called "Czar Ferdinand I of Bulgaria papers". Her artistic productions have remained enduringly popular: in 1990, one of her pencil drawings ("Etude des chiens") sold for 20,000 Francs (Paris, Tajan, 5 Dec. 1990, lot 23). 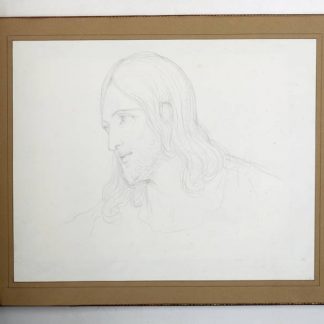 You're viewing: Clementine d'Orleans, princess (1817-1907), daughter of Louis Philippe, King of the French; married to Prince August of Saxe-Coburg, mother to King Ferdinand of Bulgaria. Sketchbook/scrapbook containing drawings by the Princess and other artists, …France and England, 1827-1851. $4,402.00
Add to cart