"a unique showcase of Ottoman technical competence": the earliest comprehensive study on the history and theory of Ottoman architecture

First and only edition of "the earliest comprehensive study on the history and theory of Ottoman architecture" (Ersoy, p. 117). Only a few copies of this rare work, produced to the most exacting standards of the day, appear to have been printed. It was produced under the patronage of Edhem Pasha, president of the Imperial Ottoman Commission for the Vienna Exhibition of 1873. The text (in German and French, followed by Turkish) consists of a series of monographs. The entire work was "prepared [...] by a diverse group of artists, architects, and bureaucrats who had close professional ties with the palace. The text begins with a lengthy historical overview that embodies a pioneering attempt to define and represent the entire Ottoman architectural past according to the norms of modern historiography [...] The editor of the whole volume, and the author of a substantial portion of the original text, was the amateur historian and artist Victor Marie de Launay, a 'naturalized' Frenchman who held a secretarial position in the Ministry of Trade and Public Works [...] With a keen scholarly interest in architecture, art, and traditional crafts, Marie de Launay, throughout his lengthy bureaucratic career in the imperial capital, was deeply involved in the representation of the Ottoman state in the world expositions [...] The expertly crafted plates that supplement the text of the 'Usul' include plans, elevations, and section of various Ottoman buildings as well as a rich panoply of decorative details and ornamental patterns, all meticulously depicted in accordance with the academic standards of the Beaux-Arts model [...] Accompanying the monochrome illustrations are fourteen chromolithographic plates (printed in the Sébah studios in Istanbul), skillfully drafted with vibrant and sharply delineated colors. In the superior technical quality and graphic precision of its illustrations, the 'Usul' is duly comparable to its highly acclaimed European counterparts, such as Owen Jones's 'The Grammar of Ornament' (London, 1956), Auguste Racinet's 'L'ornement polychrome' (Paris, 1869), or Jules Bourgoin's 'Les arts arabes' (Paris, 1873). Thus, leaving aside the intellectual scope of its text, the 'Usul' must be considered an artistic specimen in and of itself, conceived as a unique showcase of Ottoman technical competence in the art of publishing" (ibid., p. 117-120). The set is not infrequently encountered incomplete: even the Blackmer copy lacked a plate, and that of William Morris (now in the Calouste Gulbenkian Library) lacked three. 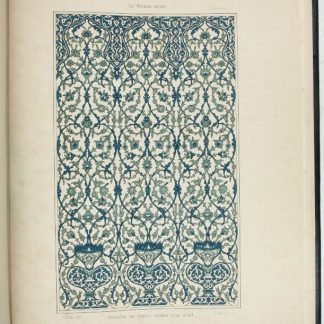