4to. 5 double-spaced typed leaves (watermarked "Millers Falls Ezerase"). With a manual correction on the first leaf.

Manuscript for Mailer's monthly Esquire column "The Big Bite", signed by the author on the last leaf. Incipit: "The rite of spring is in the odor of the air." Mailer depicts the doomsday atmosphere of New York during the Cuban Missile Crisis of October 1962. Esquire published Mailer's column from November 1962 through December 1963, when the writer began devoting the space to the serialization of his novel "The American Dream". According to his secretary at the time, Anne Berry, Mailer handed her the first draft of a column, which she typed triple-spaced, gave it back for editing, and then typed it again double-spaced (cf. Mills, Mailer. A Biography, p. 263). This manuscript thus belongs to the second, edited version of the column. 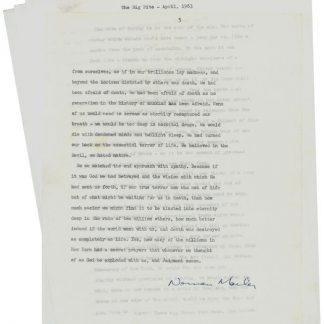