A Peace Treaty on the Birthday of the Prophet

4to. 22 pp., final blank. With woodcut device on title page and one initial. Red modern cloth with giltstamped spine title.

First edition of the peace treaty between the Netherlands and Algiers on 23 November 1757 (or 12 Rabi' al-awwal of the year 1171, the Prophet's birthday), which ended a war that had lasted since 1755. After the War of Spanish Succession had left the Dutch navy neglected and their merchant fleet large and vulnerable, the corsairs of the Barbary states had begun a series of attacks on Dutch ships. Already the only major naval power to pay tribute to Algiers (under a 1679 treaty), the Netherlands increased their payments to bring about by diplomacy the peace they were unable to enforce by military means. While Algiers had agreed to the peace in 1726 (and the Dutch made new treaties with Tunis and Tripoli), relationships remained tense. The Netherlands were required to send large annual amounts of gunpowder, arms, and naval stores, and "occasionally, if the demands of the Barbary corsairs became too excessive, the Dutch would fight back. They were at war with Algiers from 1755 to 1757 and 1792 to 1793, and with Tripoli from 1789 to 1791. However, in the end peace would once more be concluded. Payment of tribute was always cheaper than maintaining a naval squadron in the Mediterranean for years on end" (Jamieson, Lords of the Sea: A History of the Barbary Corsairs [2012], p. 179).

The present copy is a new issue with an added final leaf (and blank leaf) containing three additional articles appended in 1760. 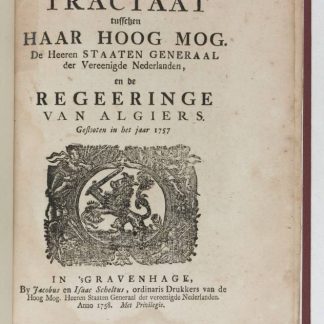