16th century collection of nine alchemical tracts, including one by Ibn Sina

Extremely rare edition of this collection of nine alchemical tracts, including "De tinctura metallorum" (On the Colorations of Metals), attributed to the great Arab scientist Ibn Sina, who is known in the Latin tradition as Avicenna. Ibn Sina was one of the most significant thinkers and writers of the Islamic golden age, and his bibliography comprises nearly 270 titles, several of which fall into the category of the arcane sciences (cf. GAL I 458 V and GAL I S, p. 828). "Ibn Sina studied the philosophical and scientific foundations of this subject [alchemy] and even undertook alchemical experiments" (DSB).

The collection further includes two works attributed to Raymond Lull, one of the most interesting scholars of the Middle Ages, another published under the name of Aristotle, and five anonymous ones. A second part was published in the same year, containing only one work: the famous Rosarium philosophorum. It can be regarded as a separate publication and is not included here. Curiously, a late 16th century manuscript copy of only this volume (a folio of 70 leaves) is held by the Wellcome Collection (MS.233, acquired in 1906).

Binding very well preserved. Contemporary handwritten marginal annotations and underscoring throughout, an early owner's inscription (struck through) and some further notes on the title-page. Annotations slightly trimmed by the 17th century binder's knife, somewhat browned throughout and dampstains in the first half of the book, otherwise in fine condition.

Cat. no.: 9 Catalogue: A Selection of 20 Books and Manuscripts on the Art of Alchemy Tags: Alchemy, Arcana, Islamic World, Medicine, Science 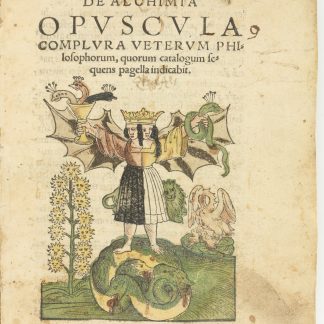