Rare atlas, with maps dated between 1822 and 1829, mostly drawn by C. F. Weiland (though some - Galicia, Tyrol, Hungary - are designed and engraved by F. W. Streit). Includes two hemisphere maps of the world and 39 maps of Europe, 6 of Asia (with the Arabian Peninsula shown in the general map and the Arabian Gulf in the map of Iran and Afghanistan), 7 of Africa, 5 of America, and 1 of Australia.

The "Landes-Industrie-Comptoir", founded by F. J. Bertuch in 1791 and in 1804 founder of the subsidiary "Geographisches Institut", had in 1797 first issued A. C. Gaspari's slightly misleadingly named, large-format "Allgemeiner Hand-Atlas der ganzen Erde" ("General hand atlas of the entire earth"), whose 60 maps had been produced by the efforts of no fewer than 11 cartographers (including Streit and Adolf Stieler). Gaspari's atlas was the first to offer continuous improvements in successive editions, which soon led to a standardization of the maps. Until the 1840s most of the work was done by Weiland. Under frequently revised titles the atlas saw no fewer than 49 editions until 1880.

Slightly wrinkled and stained (mainly in the margins); some edge tears to title page and table of contents (some repaired). Binding rubbed and bumped at extremeties. 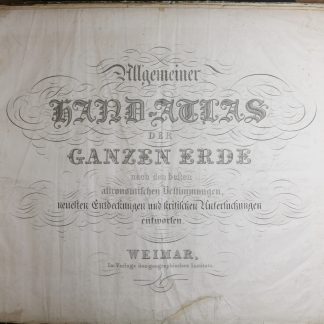