First German large folio edition of the historical atlas that became famous under the author's pseudonym "Le Sage" (first published in London in 1801). Count de Las Cases accompanied Napoleon to Saint Helena as his inofficial secretary. Among the maps are a map of the world in two hemispheres, Europe, America, Africa, Asia with Arabia ("excellent horses, home of the camel, of coffee and aloe"; "Mekka - birthplace of Muhammad; site of the famous Kaaba"; "Nejd - large, fertile, populous province"; in the south: "boundless sand desert with occasional oases; Niebuhr is the geographer of this country which Strabo, Ptolemy and - in the Middle Ages - Abulfeda have described"), as well as of the Ottoman Empire and Greece with the European portion of Turkey. The preface is dated May 1829, the plates are mostly dated between 1825 and 1831, with two new maps of Switzerland, dated 1838, at the end. 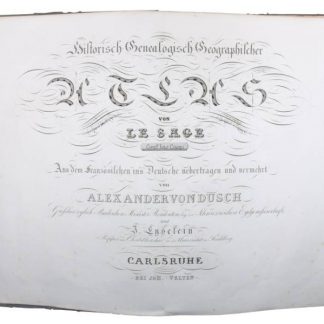