Confidential reports on trade with the Middle East

[Consuls - Secret reports]. Reports in Relation to Trade with Turkey in Asia, Persia, and Central Asia. [With:] (2) Reports on Trade with Turkey. (3) Turkish reforms: The Development of Asia Minor by the "Etappen" System. (4) [With a report from] Mr R. Thomson to the Marguis of Salisbury. (5) Memorandum by Lieutenant-Colonel Ross on Southern Traffic Routes [with Persia]. (6) Memorandum by Mr. W. J. Dickson on Commercial Relations between Persia and Great Britain and Communication with Persia.

A bound collection of confidential reports from consular officials primarily regarding trade with the countries of the near and Middle East. The first work contains reports from cities such as Baghdad, Aleppo, Trebizond and Beirut. The second includes numerous short reports from all across the region, including a one and a quarter page report from the Consul at Jeddah describing local trade along with brief descriptions of the state of transport and communications routes.

Repairs to the upper ends of both joints, very good. 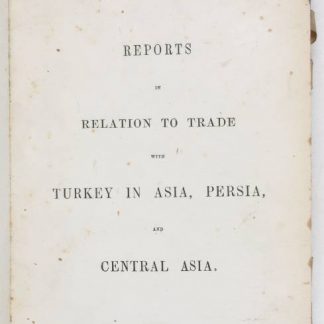