A famous tract against Islam

Small folio (209 x 291 mm). 248 unnumbered leaves (without the first and last blank, as usual). Gothic type, 2 cols., 51 lines. With a woodcut in the text on fol. a2r and printer's device at the end. A single ink initial on p. a2 supplied by the owner. 18th century full calf with panelled boards and giltstamped spine label. Marbled endpapers. All edges red.

Rare edition; a single copy in Great Britain. The "Fortalitatium fidei", the principal work (written ca. 1458) of the baptized Spanish Jew de Spina, is considered the "methodical and ideological foundation of the Inquisition. The book, divided into five chapters, targets chiefly Jews and Muslims" (cf. LMA I, 408f.). Of the five books, "the first [is] directed against those who deny the Divinity of Christ, the second against heretics, the third against the Jews, and the fourth against Islam and the Muslims, while the fifth book treats of the battle to be waged against the Gates of Hell. In this last book the author dwells at length upon the demons and their hatred of men; the powers they have over men and the diminution of these powers, owing to the victory of Christ on the Cross, the final condition of the demons, etc." (Catholic Encyclopaedia). "Ouvrage fort curieux de ce théologien espagnol [...] il était dit-on d'origine juive, c'est pour cela que son 'Fortalicium' pèut ètre classé dans une bibliothèque kabbalistique" (Caillet). Part 3, on the iniquities of the Jews, is a veritable encyclopaedia of mediaeval antisemitic libel, containing numbered lists of Jewish "cruelties" and refutations of the Jews' supposed anti-Christian arguments. The section on Islam lists the numerous Saracen wars, while the fifth book is devoted to the battle to be waged against the Gates of Hell and its resident demons, whose population the author calculates at over 133 million; this is one of the earliest printed discussions of witchcraft and a precursor to the "Malleus maleficarum", the first edition of which appeared in the same year as this present edition.

Occasional contemporary ink marginalia (some touched by the binder's knife); some slight worming, confined to blank margins. Some even browning and a weak waterstain, but a very good, wide-margined copy with an 18th century noble collection stamp (crowned Gothic letter G; not in Lugt) on the first leaf. 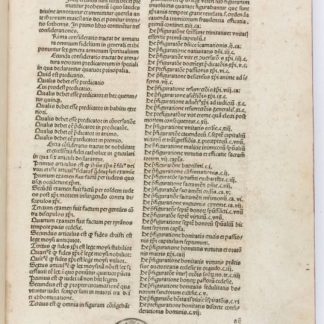