Letters from a traveller in Muslim lands

Second, significantly expanded edition of 24 travel letters by the Dutch educator and enthusiast of Arabic Nicolaes Cleynaerts (Clénard, 1493-1542), who visited Spain, Portugal and Morocco during the last years of his life, sending Latin letters "dated variously from 1535 to 1541" (Weber) to friends in his native Belgium: "He moved from Louvain to Salamanca and then to Fez (in 1540), so as to expand his knowledge of the Arabic language. In Granada he undertook a translation of the Qur'an. His letters to Latomus (1510-96) date from this time, when he was preoccupied with Qur'anic studies" (cf. Göllner I, p. 416); "his missives give a narrative of his journey to Morocco and provide critical commentaries on Islam" (cf. Göllner II, p. 18). Latomus's first collection, published in 1550, had comprised no more than 14 letters (while a "fragmentary publication" of Clénard's letters "concerned with the teaching of Latin" had appeared as early as 1546). "Notably the letters to Latomus of July 1539 and of April 1541 contain quotations in Arabic in a barely readable version of the original script" (Smitskamp, PO 248). Clénard had become acquainted with Islamic theology in Granada, learning Arabic from a local Moor, and endeavoured to familiarize Christianity and Islam with each other more closely. In Morocco he was welcomed by the Sultan, but his opposition to the slave trade, in which the Portuguese consul in Fez was involved, resulted in a cabal that forced him to flee back to Spain, and he died in the Alhambra soon after. His letters bear witness to the Spanish, Portuguese, and Moroccan history of his age and preserve his thoughts about the common ground between the Muslim and Christian faiths.

Some insignificant browning; an appealing copy. Rare: in 1999 the Burrell copy, the only copy in auction records, commanded £1,400 in spite of poor condition. 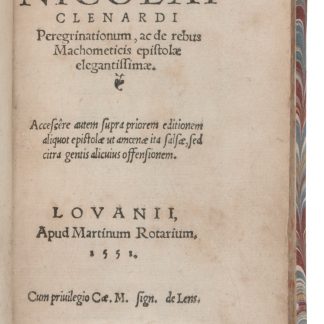