[Telfair, Charles]. An Account of the Conquest of the Island of Bourbon.

London, Thomas Egerton (back of title-page and colophon: G. Hayden), 1811.

8vo. (6), 116 pp. With a folding lithographed plan of Saint-Denis. Contemporary dark green cloth, rebacked with the original backstrip laid down.

Rare first and only edition of a firsthand account of the British invasion of the Island of Bourbon (Réunion) in 1810 by "an officer of the expedition", sometimes ascribed to Charles Telfair (1778-1833), an Irish botanist who visited Réunion and Mauritius in 1810 as a ship's surgeon to the Royal Navy. The author briefly narrates the events leading up to the invasion, and in more detail describes the invasion itself, providing much information on the ships, squadrons, regiments and officers involved. "His object was to commemorate facts, while he was a spectator of them, and to stamp them with the sentiments they excited" (p. [5]). Also included are the general instructions and directions to officers at the head of brigades, issued by Lt. Col. Keating (pp. 38-53), and transcripts of letters, decrees and newspaper articles (or extracts thereof) relating to the invasion (pp. 54-102). The book closes with an appendix on the island's "value" as a colony, observing its population, climate, agriculture, trade, and infrastructure (pp. 103-116). The island of Bourbon in the Indian Ocean had been in French hands since 1715, until the British Royal Navy invaded it in 1810. The main objective of the expedition, led by Josias Rowley (1765-1842), was to capture the island as well as Mauritius so as "to secure, on the most permanent foundation, the dominion of England against the hostile attempts of France" (p. 4); the French retreated to the islands after raiding British convoys from India. Though the British kept hold of Mauritius, the island of Bourbon was returned to France at the Congress of Vienna of 1814. It was renamed "Réunion" when the house of Bourbon abdicated during the French Revolution of 1848.

Browned and foxed throughout, otherwise in good condition. Binding rebacked and restored. 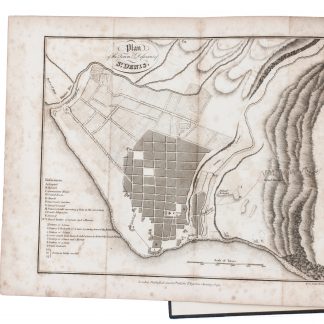