A very charming album. The owner, Andreas Barthold, was born in 1752 into a wealthy merchant family from Stettin. He attended the school of mathematics established by pastor Johann Julius Hecker in 1747, which he left at the age of about 16 years, and was further educated at the Hamburg Academy of Commerce, founded in 1768. In 1773 he returned to Stettin, where he worked as a merchant, became a citizen in 1778, and married the following year. After this, his trail disappears.

Most of the entries in this album are from teachers and classmates at the Realschule in Berlin; another group of entries is by Hamburg merchants. Apart from the identifiable contributions (some 15 entries), the importance of this album lies in its very appealing colour illustrations, some of which are by known artists: this includes a view of a channel with ships by Christian Gottfried Mathes (1738-ca 1805), dated 1768, and a coastal landscape by Johann Carl Wilhelm Rosenberg (1737-1810), dated Stettin 1781. 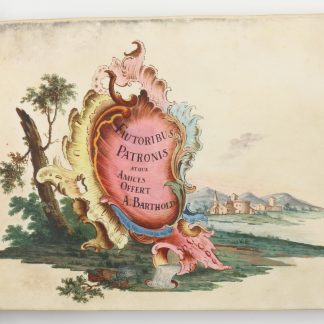