4to. 2/3 pp. Bifolium with integral address panel and censor's comment.

Written during the divorce proceedings of Countess Sophie von Hatzfeldt (whose lawyer Lassalle was), during imprisonment, to judge "Oppenhoven" (i. e. Oppenhoof) at Cologne, asking for an arraignment and for the examination of several witnesses named Uderbach, Carl Gianella, and Gladbach regarding Arnold Goedecke and his concern with Mr. v. Stockum "in whose service he is".

During the trial, Lassalle had been arrested and was accused of having stolen a casket of important documents.

Traces of moisture on top of fol. 1 (opening lines faded) and some damage to edges. 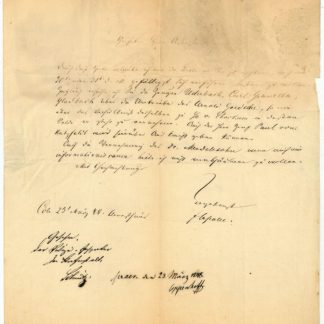