Small 4to. 3 pp. Bifolium with address panel to verso.

In French, to his brother Jean in Dijon, thanking him for having given him information about their "poor mother's" state of health and for looking after her. She is already an aged lady and so "it will be difficult for one springtime to mend the despair of 87 winters". Piron hopes that God will preserve their mother and keep his brother in good courage to support watching the sicknesses of body and spirit when being with her. Piron combines the comfort he gives to his brother with philosophical questions about God and finally talking about the state of Europe: "Nous avons attaqué la Reine d'Hongrie qui pour se venger y mangerà sa dernière chemise fut elle pleine de merde" ("We have attacked the Queen of Hungary who in order to take revenge would eat her last blouse even if it was full of shit").

According to Piron, Europe is on fire and in the most terrible crisis. As his brother asked him for some news of Paris, Alexis Piron informs him about a big event which is going to take place the next day: Six chariots 30 feet long each that will ride through the streets of Paris. The first one represents love and marriage and will be equipped with beautiful instrumental music. The second one is in the shape of a ship. The third one will be chariot of Ceres loaded with bred that will be thrown to the people. The fourth one will be the chariot of Comus full of sausages, tongues and beef. The fifth one will be the chariot of Bacchus to serve drinkers. According to Piron, Panurge and Brother Jean would ask for another chariot of Venus full of "filles de joie" (daughters of joy). He describes luxurious life in Paris, sumptuous balls and ballets, a table to choose from 800 covers, all the gold and silver brocade in the stores of the city and all the jewels of the crown. Piron says that this is the misery of their time, an even greater misery than is to be found in the bourgeois garrisons with their weapons, lodgings and taxes. Piron ends his letter by assuring Jean that in times of war, plague and famine just as in times of peace and abundance he is and will remain his affectionate brother for all of his life.

Somewhat spotty and some damage to edges; some tears unprofessionally restored. 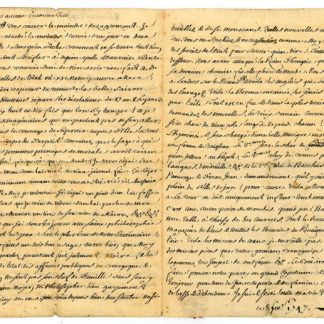