The first edition of Stalin's second book; extremely rare. It is widely known that Stalin's role in the party during pre-Revolutionary times was mostly practical: assigned to supply money for the cause by way of expropriations, he became a well-known figure around 1905, and later, during the Civil War, a commander of the Red Army and a party leader. Very little was known of Stalin's political views before Lenin's death in 1924. While Stalin was always regarded as the loyal executor, unlike all other key Bolshevist figures he had not published any significant works - merely occasional articles in which he did not give away a clear position. Stalin became the People's Commissar for the nationalities in 1917 when the position was created. The committee survived until 1924, when the USSR was formed. The present book should be regarded as a collection of his essays on the subject of the national question. One of the principal ideas here advanced by Stalin was that the marginal areas of the Russian Empire should not be separated. He argues that all nations should join in the fight for the world revolution while the colonies of the British Empire ought to be liberated. On this point he contradicts Lenin, who at that time was prepared to grant sovereignty to some nations such as Finland. It is worth noting the author's name on the title page: Stalin used various worknames within and outside the party, largely due to the illicit nature of his pre-revolutionary activity (research has found him to have used nearly 30 party bynames at the time). In this brochure his name is given as "Stalin (Koba-Dzhugashvili)", citing his two most popular worknames and his real Georgian surname which he would not use in later years, and no more books appeared under it. At the time, Stalin was already vying for the party leadership with Trotsky, Kamenev, Zinoviev and others, and he may have felt it necessary to declare himself. 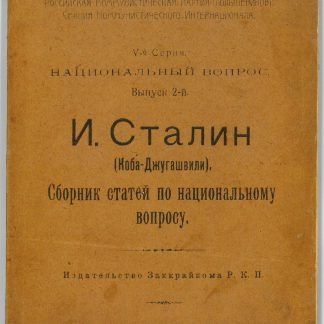 You're viewing: Stalin, Josef (Dzhugashvili). Sbornik statei po natsionalnomu voprosu [The Collection of Essays on the …Tiflis, 1922. € 18,500.00
Add to cart