The "Wunderhorn" in contemporary morocco

First edition of the principal work of German romanticism, one of the era's most beautiful and best-known publications. Includes the frequently-lacking appendix and all half titles. Without the printed main title page to the first volume, which was probably never published at all: Mallon notes that he was unable to verify a single copy containing it, adding that most copies lack both a main title and a half title. The half titles of vol. 2 and 3 have been mounted before the respective engraved titles. Due to their size, these beautiful engravings as well as the frontispiece to the appendix (all after and by W. Grimm and E. L. Grimm) are frequently found trimmed by the binder's knife, but they are intact in the present copy. Some slight occasional foxing due to paper, but altogether a very appealing and apparently entirely complete set.

Provenance: from the estate of the Frankfurt lawyer Wilhelm A. Schaaf (1929-2015), a specialist in economic, commercial and insolvency law. 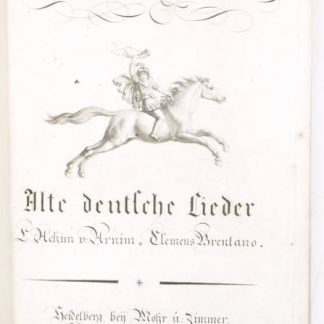