The Stumpff Collection of Orientalists

Oriental studies and scholars. A substantial collection of autographs by German, French, and British oriental scholars.

134 described units in folders, each mostly containing letters, manuscripts or other documents by a single writer, comprising a total of more than 300 pages in various formats: folio, 4to, 8vo, 12mo. In excellent condition throughout, stored within acid-free tissue covers in two large cardboard collection cases.

The unique value of this sweeping anthology, which offers ample material for research, lies in its inclusiveness and scope. Among the great scholars whose letters and postcards, manuscripts, and occasional photographs are united in this vast trove are such great names of oriental scholarship as Silvestre de Sacy (1758-1838); Anquetil-Duperron (1731-1805), the founder of Persian studies in Europe; Antoine-Léonard de Chézy (1773-1832), the editor of "Layla and Majnun"; Johann David Michaelis (1717-91, discussing Abulfeda manuscripts); the leading Arabist Heinrich Leberecht Fleischer (1801-88); Joseph von Hammer-Purgstall (1774-1856); Karl Richard Lepsius (1810-84), pioneer of Egyptology; Georg Friedrich Grotefend (1775-1853), decipherer of cuneiform; as well as Gottfried Kosegarten (1792-1860) and Friedrich Wilken (1777-1840), including their correspondence with Joseph von Hammer-Purgstall. Although the bulk of the collection focuses on university-based academic scholarship, several Middle Eastern travellers are included here as well: Isabella Bird (1831-1904), the first woman FRGS; the physician Michael Erdl (1815-48) and his colleague Johann Martin Honigberger (1795-1869, about his journeys); Jacob Hafner (1754-1809, a quotation dated 1788); Claudius James Rich (1787-1820, writing from Baghdad); the naturalist Pierre Sonnerat (1749-1814), or the linguists Théodore Pavie (1811-96) and Eduard Sachau (1845-1930). Numerous early documents, often from or relating to French and British India, bear witness to the brisk trade maintained between the orient and the occident over many centuries (a 1625 letter from Lahore to a Venetian jewel merchant; a 1778 letter about naval matters and the situation in Pondicherry; numerous mid-19th century items of private and business correspondence from Ambala, Bombay, Calcutta, and Madras). Several additional letters and documents by British statesmen and military commanders demonstrate how any study of Middle Eastern matters in the 19th century invariably touched upon - and not infrequently became mingled with - the political interests of the dominant western power in the region.

This collection was assembled by the German administrative judge Alfred Stumpff (1928-2008), a member of the German-Indian Society of Mainz (parts of his estate are kept by the Mainz University Archives under their shelfmark NL 39). Most of the manuscript matter has been faithfully transcribed and extensively researched and annotated by Stumpff, with his notes included with each piece (frequently even noting the provenance as well as the date and price of acquisition).

A detailed list of contents is available upon request. 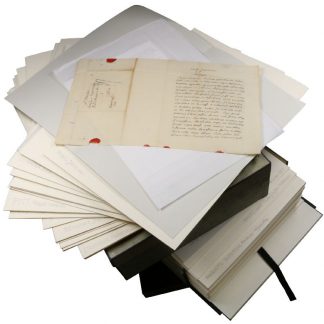 You're viewing: Oriental studies and scholars. A substantial collection of autographs by German, French, and British oriental …Various places, 17th through 21st centuries, but mainly 19th century. € 48,000.00
Add to cart