The European aristocracy of the 1850s

Remarkable, wide-ranging friendship album of Princess Anna of Hesse and by Rhine (1843-65), only daughter of the Hessian general Karl of Hesse and Princess Elizabeth of Prussia. In May 1865 she married Grad Duke Frederick Francis II of Mecklenburg-Schwerin but died of puerperal fever a week after the birth of her only child. Both her parents as well as her later husband have signed her album.

Pages numbered in pencil up to p. 160 by a later hand. Provenance note on the final page of text (p. 133) by Marie of Schwarzburg-Rudolstadt, Grand Duchess of Mecklenburg (1850-1922): "This book belonged to the Grand Duchess Anna of Mecklenburg née Princess of Hesse-Darmstadt; it was later given to Duke John Albert of Mecklenburg in Dezember 1919 [...]". 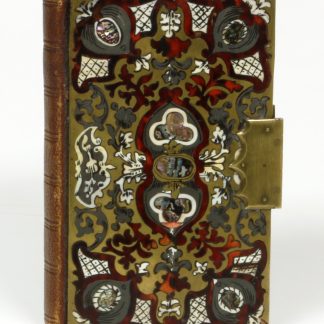