Draft letter written to the German and later British physical chemist and physicist Sir Francis Simon: "Many thanks for your letter which was very useful for me. As an expert member of the Fellowship Committee of the International Federation of University Women I have to examine the work of the applicants as far as they are related to physics. Of course, as Miss Hunts publication is not yet declassified I can not form any personal opinion of her. But from your letter written to me as well as from your and Dr. Kurtis testimonials attached to Miss Hunts application I infer that Miss Hunt can be recommended as a very suitable candidate for the fellowship for which she has applied [...]". 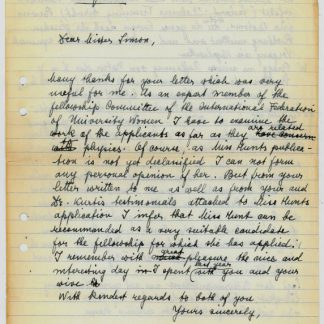