A prose work of anecdotal moral tales, most likely from North-Western India (now Pakistan) from the mid or third quarter of the 19th century. Untitled and without a colophon or marginalia, beginning abruptly, it appears to be incomplete, despite the conventional presence of an - apparently overpainted - headpiece of the sarlawh type.

Unlike similar Persian allegorical prose works, whose tales revolve mostly around allegorical animal characters, this narrative, oriented towards moral and spiritual instruction, appears to be inspired on the one hand by Saadi’s gently ironic works such as "Gulestan". Divided into several chapters, or "abvab", it focuses on the moral analysis of human deeds and intentions, informed by Indian Sufi spiritual tradition.

The scene is set in an exquisitely Indian historical context: the text mentions a "raj" (Hindu king), and the Mughal Empire also make an appearance with the protagonist of the final tale, Alamgir Padshah (the "World-Seizing Emperor", likely the Mughal ruler Awrangzeb, who reigned 1658-1707), encountering a certain Mard-i murtaz (a spiritually well-versed man). The manuscript is embellished by full-page miniatures, one depicting a hunting scene, another illustrating a valiant horseman slaying a dragon-like monster. The illustrations are colourful and lively, if conventional in their disposition of the human figures and landscape before a background without depth. 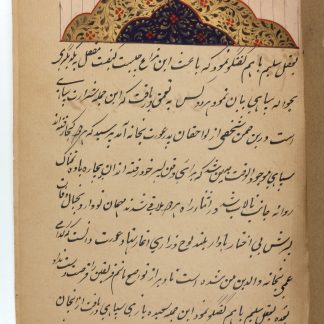