In Defence of the Prophet

(Bound with) V: [Fludger, John]. The absolute and proper eternity of hell torments fully proved from scripture, from reason, and from the natural attributes of God. London, T. Gardner, 1739. (2), 36 pp.

(Bound with) VI: Phileleutherus Dubliniensis [i.e., Patrick Delany]. Reflections upon polygamy, and the encouragement given to that practice in the scriptures of the Old Testament. London, J. Roberts, 1737. (2), 188 pp.

(Bound with) VII: [Booth, George, Earl of Warrington]. Considerations upon the institution of marriage. With some thoughts concerning the force and obligation of the matrimonial contract. Wherein is considered, how far divorces may, or ought to be allowed. London, John Whiston, 1739. VI, 154 pp.

Only edition; rare: an apology of Islam and its Prophet, influenced by the writings of Pococke and Reland, and published a year after George Sale's "Koran", the first English Quran to be translated directly from the Arabic. The anonymous author counts among those "interested in revising 'imposture' theories by recasting Mahomet in a positive, Greco-Roman republican mold - a wise 'Arabian legislator' [...]. [This work,] occasioned by Sale's translation of the Qur'an, suggests that Islam anticipates the Protestant Reformation: Mahomet 'laid the foundations of a general and thorough Reformation, Conversion, and Re-Union in ages to come'" (H. Garcia, Islam and the English Enlightenment, 1670-1840 [2011], p. 256). From the beginning the author cautions that "no disputes ought to be conducted with more temper and moderation than those about religion, but, unluckily, none have been managed with such warmth, bitterness, and inequality" (p. 1); he defends the Prophet against unjust accusations levelled against him by his Christian detractors and closes with the admonition that young British scholars of theology would do well "to apply themselves, among their other exercises, to the study of the oriental tongues, which, upon an impartial survey of the present state of religion, seems to claim much of their attention" (p. 53f.).

Bound with this are eight other English theological works (all first or only editions) concerned with hell-fire and heresies, several written with a decidedly free-thinking slant. Binding severely rubbed and bumped; hinges cracked. Variously browned throughout with occasional staining; contemporary handwritten table of contents on loose flyleaf; second flyleaf clipped with a handwritten title "A Vol. of scarce & curious Tracts" on verso; first title page has 19th century ownership stamp "R. Blackwell". 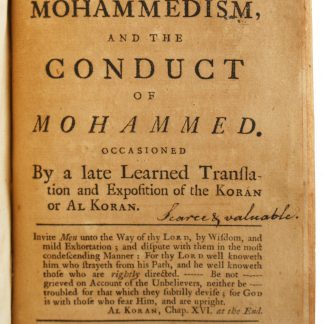