First Russian edition of what appears to be a collection of shorter essays drawn from the works of Karl Kautsky, including his 1891 "The Class Struggle (The Erfurt Program)", which the Social Democrats adopted as their political program, as well as shorter pieces published in Kautsky's Marxist journal "Neue Zeit". Published as part of the "Library of the Russian proletarian," a series intended to be smuggled into the Russian Empire. The publisher, Georgi A. Kuklin (1880-1907), is a curious figure worthy of further study: having fled to London at the age of 21, he later founded his own progressive reading library in Geneva and published the above-mentioned series, as well as publishing a valuable bibliography of Russian revolutionary texts before his early death.

Stamp of a non-existing library with duplicate mark and pencil marks to front wrapper and title. A good copy. 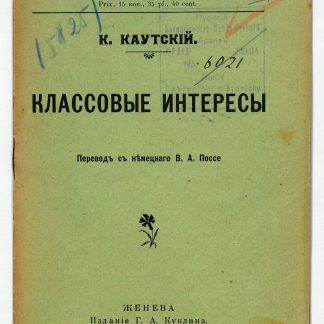