Important brochure devoted to the so-called discussions about trade unions, which took place in late 1920 and early 1921. A heated debate about the function of trade unions developed, with numerous camps pitted against each other both at congresses and in newspaper editorials. Most notably, the group around Trotsky held the view that trade unions should be run by ideological leaders, whereas Lenin's position eventually shifted to a more independent role for trade unions. 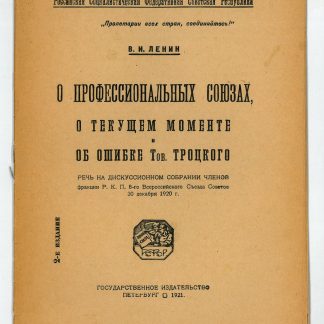