[Anarchism]. Freedom. A Journal of Libertarian Thought, Work and Literature.

A set of two runs of the British anarchist journal "Freedom", produced under the editorship of John Turner (1865-1934). Comprises May 1930 to February 1932, omitting September through October 1930 (issued monthly), and January to May 1933 (issued weekly). "Freedom' was founded in London in 1886 by N. Chaikovski and F. S. Merlino as well as Prince Kropotkin. It appeared under slightly changing sub-headings until 2014 and now continues as an online publication. The present issues contain reports on the peace and workers' movement, protest marches and various activities as well as notes on topical publications in England and abroad.

Occasional browning, but very well preserved in all. Rare. 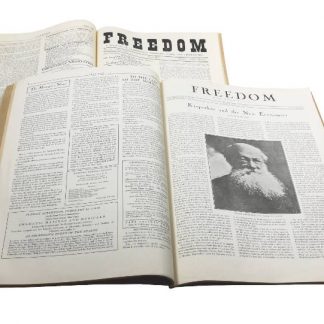