Including extracts from the "Communist Manifesto"

First printings throughout; a near-complete run of the almost unobtainable anarchist monthly. The volume contains the first 16 of the 17 issues published (the 16th issue is inserted loosely at the end). The editor and largely sole contributor was the German anarchist Johann Joseph Most (born in Augsburg in 1846, died in Cincinnati in 1906), who was incarcerated by Prussia in Plötzensee, then repeatedly by the United States on Blackwell's Island; in his American exile he also edited the journal "Freiheit" ("Freedom"). Apart from Most's own writings the "Internationale Bibliothek" also printed works by the classic anarchists such as Kropotkin or Bakunin. Issue 6 contains lengthy extracts from the "Communist Manifesto".

A social democrat since 1871, Most had been expelled from the party as an anarchist in 1880. He was deported from Berlin in 1878 and emigrated (via London, where he speant two years in jail) to New York in 1882. He was involved both in the notorious "Haymarket Riot" of 1886 as in the anarchist assassination of President McKinley in 1901. "Most was a magnetic speaker, with sinister power of hatred and invective. He was a brilliant writer full of biting wit and sarcasm, the leader of the extreme faction of American anarchists, most of them German-speaking. He dictated the declaration of principles adopted by the Pittsburgh Convention of 1883 which became the bible of communist anarchism in America" (Arndt/Olson 362). Especially the first printings are of the utmost rarity; there are also reprints prepared in 1892 and 1893, after the journal's original run expired in 1901. In Germany a single complete run is known (Friedrich-Ebert-Stiftung); two other libraries have various individual copies.

Binding insignificantly rubbed. Occasional browning with some fingerstaining to a few leaves. Some edge flaws to the untrimmed 16th issue. Well preserved altogether. 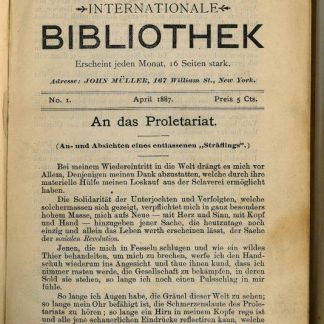