A Lifetime of Voyages to the Middle East and South America

A lively and detailed record of adventures in three continents. John Burns was a Scottish surgeon who spent his career in naval service, beginning with a journey to Brazil and the River Plate on HMS Harrier in 1835. He records in detail his impressions of such locations as Rio de Janeiro, Bahia, Buenos Aires and Montevideo, describes slavery (including slave markets), sugar manufacture, political disturbances in Montevideo ("the inhabitants all wore a red ribbon at the button hole to distinguish the faction of Rosas [...] the color of the opposite faction was blue, but dare not show a color"), and the execution of Indian insurgents. He later transferred to the Griffon and spent several years in the Mediterranean. He gives a lively account of his experiences in Constantinople from his first experience of a Turkish Bath ("you are taken, when undressed, into 3 Chambers, each more heated than the other, till you can scarcely breathe the atmosphere, the perspiration flows freely when an attendant rubs the body down with a hair glove") to a nocturnal adventure in Pera that began "when we were overtaken by a half drunken Irishman". He visits Tunisia when the ship assisted in the recovery following the wreck of HMS Rapid in April 1838, but this period of his career was dominated by the carnage in the eastern Mediterranean caused by the Ottoman-Egyptian War. The British supported the Ottomans, and Burns saw action in the bombardment, capture, and subsequent unrest in Beirut in August-September 1840 ("there was a serious fight on shore between the Maronites and the Albanian troops in which the latter were slaughtered, and one night we were surprised by the sound of a terrific explosion when we saw the Castle of Tripoli blown up"), and also in the similar bombardment of Acre, where Burns was an eyewitness to the terrible suffering of the civilian population ("in the hospital great numbers had been killed in their beds"). From 1842 to 1846 Burns was on the Sloop Sappho off the African coast. Their principal mission was the suppression of the slave trade, and he describes, for instance, the capture of a ship with a cargo of "jewelry, trinkets, beads", typically used to buy slaves, under which was found a hidden slave deck (20 September 1843). He also found time to explore the Southern African veld ("The country here is excessively wild: not a human being to be seen, but everywhere the tracks of Zebra and leopards"). 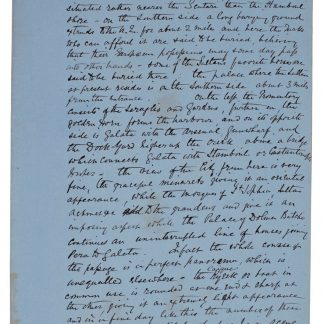