A rediscovered late work: apparently the final, never completed and never published collection of 78 preludes for Protestant church songs by the highly esteemed J. G. Nicolai (cf. ADB XXIII, 593), who served as the organist at Rudolstadt for nearly forty years. The book must have served him to write down newly composed choral preludes as they were occasioned by the ecclesiastical year. The manuscript begins with "Nun komm der Heiden Heiland" for the first Sunday in Advent; Christmastime includes chorals such as "Vom Himmel hoch, da komm ich her", "In dulci jubilo", and "O Jesulein süß"; Passiontide includes "O Lamm Gottes unschuldig", "Da Jesu an dem Kreuze stund" and "O Mensch bewein dein Sünde groß". For Easter, Nicolai wrote preludes to "Christ lag in Todesbanden", "Christ ist erstanden" and "Heut' triumphieret Gottes Sohn", for Pentecost to "Komm heiliger Geist" and "Der heilige Geist hernieder". The abrupt end of the manuscript after "Nun laßt uns Gott dem Herren Dank sagen" (19th Sunday after Trinity) is undoubtedly due to the composer's final illness; the last Sundays of the ecclesiastical year are missing, though the lines of the systems have been inked in.

It cannot be determined whether the present series was intended for publication. Nicolai did publish several such collections of preludes, but this might just as well constitute a personal compilation for his own use at church services, as suggested by occasional abbreviated parts with varied figuration, likely indicating improvisation. Nicolai had already published many of the chorals for which we here find preludes in his "Vollständiges Choralbuch über die Fürstlich Schwarzburg-Rudolstädtischen Kirchengesänge" (Leipzig: Breitkopf, 1765). The attribution of the volume is secured by the cover monogram and the watermark (crowned double-headed eagle with the insignia of the Empire, based on the arms of the Princes of Schwarzburg-Rudolstadt). 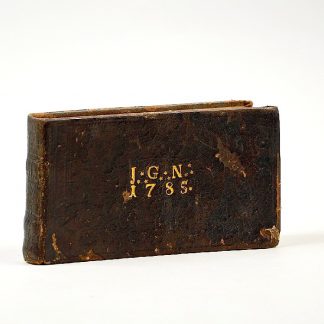