The present large-format drawing, skilfully elaborated in great detail, must be counted among the products of the early 19th century enthusiasm for Latin America and exotic countries, occasioned by events such as the travels of Alexander von Humboldt or the marriage between the Habsburg princess Maria Leopoldina with Dom Pedro, Crown Prince of Portugal and later Emperor of Brazil, and inspired by several expeditions to Brazil bankrolled or led by European noblemen. To provide an understanding of these newly discovered landscapes, cities and cultures to Europeans, the expeditions' teams would regularly include a number of artists. Thomas Ender and Johann Moritz Rugendas were among the painters who accompanied the explorers, preparing sketches and preliminary drafts which they later turned into lithographs or engravings depicting the exotic scenes they saw.

While the present drawing is not entirely completed (the tip of the cactus at left is merely outlined in ink, and the foliage of the enormous tree at the centre is merely hinted at in pencilled lines), the artistic quality is outstanding, with persons and plants executed faithfully and in great detail, fully consistent with the work of an artist like Rugendas, who travelled South America between 1821 and 1825.

Slight staining and browning in places. Several edge tears, some reaching into the image or reinforced. From a Viennese private collection. 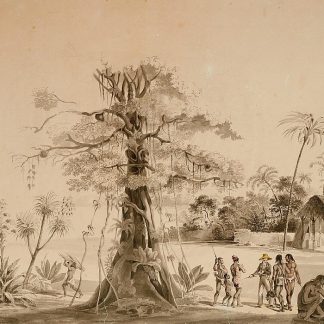