The introduction of "musica poetica", annotated throughout by a German humanist

8vo. (86) pp. With woodcut coat of arms (coloured in red and blue) on the title page; several initials and numerous musical notes in the text. Contemporary vellum.

Early edition of one of the principal treatises of musical instruction produced in the 16th century, containing a wealth of pioneering theories and practical examples; first published in this form in 1537. It also boasts the first consistently executed example of a canon (still called "fuga"), with references to compositions by Josquin and Walther.

Based on the works of Rhaw and Agricola, Listenius's treatise avails itself of Melanchthon's new educational methods and "became very popular as a school primer in Germany and Austria, and had appeared in more than 40 editions before 1583. The treatise was primarily for teaching singing, and is arranged in a novel manner. Each subject is treated in a series of short, simple rules copiously illustrated with music examples. In the section on mensural music Listenius used the canon [...] for his examples. For the first time, in addition to the traditional terms 'musica theoretica' and 'musica practica', he introduced the term 'musica poetica', by which he meant instruction in composition. The term remained in general use in Germany for over a century" (K. W. Niemöller, New Grove XI, 28).

Contemporary handwritten ownership of "Joannes Thenn S." in a humanist hand on the title page (no relationship could be traced to the Franconian Johann Thenn who had become master of the Salzburg mint in 1500); numerous Latin underlinings and marginalia by the same writer in red and brown ink throughout (covering some 30 pages). Latterly in the library of the French musical scholar Henry Prunières (1861-1942), who in 1920 founded "La Revue Musicale", with his etched bookplate to pastedown. 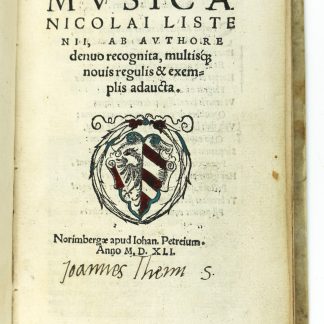