A unique collection of 18th century literature on musical theory, annotated throughout

Trouflaut, Gilbert, organist and musical scholar (1726-1820). A volume of four works from his library, all with his autograph annotations and comments, bound with correspondence to him: 2 autograph letters signed by the fellow musical scholar Pierre-Joseph Roussier (1716-1792).

A unique collection of 18th century literature on musical theory, annotated throughout by the priest Gilbert Trouflaut, canon of Nevers, including unpublished scholarly correspondence. Long the organist of the Nevers Cathedral and also employed as an expert consultant on the instrument, Trouflaut was also a noted naturalist who went botanizing with Jean-Jacques Rousseau and created the botanical garden of Nevers, where he also taught at the École centrale. Eitner (IX, 464; misspelling his name as "Trouffaut") quotes his treatise "Sur les Clavecins en peau de duffle" in the Journal de musique (1773). The works contained are individually: I) "Théorie de la musique" by C. L. Ballière de Laisement (1729-1800), a versatile scholar who knew J. J. Rousseau, d'Alembert, Diderot and Voltaire well and wrote several librettos for comic operas (cf. Eitner). "In his 'Théorie de la musique' (Paris, 1764) he developed a system based on the harmonic series of the hunting-horn; a similar system, evidently unknown to him, had been presented by G. A. Sorge in 1741. The 'Théorie' had some followers (notably Canon Jamard and Abbé Feytou) and won Rousseau's praise, but was harshly criticized by later theorists, in particular J.-B. de La Borde" (New Grove). Trouflaut's handwritten ownership (dated 1772) on title; numerous underlinings and annotations, with a scale in the margin of p. 71.

II) Principal theoretical work of the Paris musician N. L. Le Dran, "which tried to introduce a different designation for the chords in the doctrine of the figured base" (cf. Eitner). It was attacked by La Borde with the same vehemence as Ballière's theory had been. Trouflaut's handwritten ownership (dated 1772) on title; a few corrections by his hand.

III) A principal work of musical theory by the Abbé Roussier (1716-92), "self-instructed in music but inclining toward Rameau" (cf. Eitner). Here, he "also dealt with problems of musical temperament, [rejecting] contemporary systems in favour of a Pythagorean tuning" (New Grove). Presentation copy from the author with Trouflaut's note next to his ownership on the title (1772). Numerous annotations and marginalia, some quite extensive. Roussier's correspondence with Trouflaut is bound before the "Memoire".

IV) At the end, one of Roussier's two known compositions, a motet based on Psalm 150 ("Laudate Dominum in sanctis ejus"). Author's presentation copy with Trouflaut's autograph note on the title. On the verso, almost completely covered with Trouflaut's annotations, the scholar also pasted two lines of printed music from "L'art du facteur d'orgues" by Don Bedos de Celles.

Some waterstaining to margin and gutter throughout, more severely affecting the "Mémoire sur la musique des anciens" near the end and the "Pseaume CL" throughout with some loss to legibility. Although the volume was undoubtedly compiled this by Trouflaut himself, his original binding must have been so badly damaged that it was replaced by another one in the 18th century style sometime during the early 20th century. The front flyleaf contains Trouflaut's very extensive notes on the theoretical opinions of M. Guignet (maître de musique de la cathédrale de Nevers) as well as instructions for the original binding ("1# de relieure pour cet in 4° chez Tiger derrière la fontaine St. Benoit, place Cambray a côte de la porte cochere du college de Cambray"). The bookplate of the book's last owner before rebinding, the bishop of Nevers, Dominique-Augustin Dufêtre (1796-1860), has been glued onto the inside of the new upper cover. 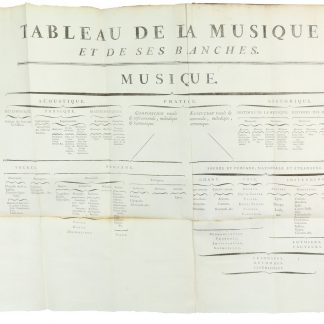