A homage to Otto von Bismarck (1815-98) on the occasion of his 80th birthday, paid by Emil Ritter's troupe of performing dwarfs. Bismarck had been forced to resign as chancellor of the German Empire five years previously, and the aged statesman was fighting to shape his image for posterity. After a vote to send him a congratulatory birthday telegram had fallen through in the Reichstag, where Bismarck enjoyed little support, some 400 German cities immediately declared him an honorary citizen - a prelude to the Bismarck mania that would seize Germany after his death three years later. The present congratulatory address contains the signatures, birthdays, and sizes (between 70 and 120 cms) of all members of the troupe. One of the best-known and most expensize dwarf acts of the time, they also enjoyed considerable fame and success in America, where they were billed as "The Ritter Midgets".

Corners bumped; some duststaining and foxing. 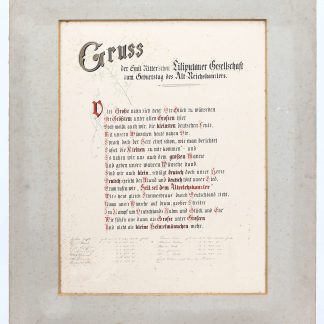