A rare annotated commentary on Aristotle, edited by a suspected heretic - annotated in Greek and Latin

Rare edition of Simplicius's commentaries on the Categories of Aristotle, annotated throughout by a contemporary humanist in Greek (and occasionally in Latin). Edited by Justus Velsius (Joost Welsens, ca. 1501-after 1581), a colourful and disputatious Dutch Renaissance scholar who entangled himself in controversy wherever he moved throughout western Europe. A friend of Vesalius, he had been made professor of philosophy and Greek at Cologne in 1550 but had to relinquish his post at the end of 1554 after having been accused of heresy.

The Latin annotations are mostly executed in an appealing, unusually careful humanist lettering, while those in Greek - frequently limited to a single catchword or phrase indexing the text in the margin, but sometimes running to notes of several lines - are in a fluid script replete with ligatures. Binding somewhat rubbed at extremeties, but well preserved. Occasional browning; very light fingerstaining to title page; in all a beautiful copy of this very scarce edition: the last copy known to have been offered in the trade was that described in Goldschmidt's catalogue 93 (1951), as part of a sammelband of Simplicius's commentaries on Aristotle. We have traced just one copy in US libraries, at the University of Pennsylvania. 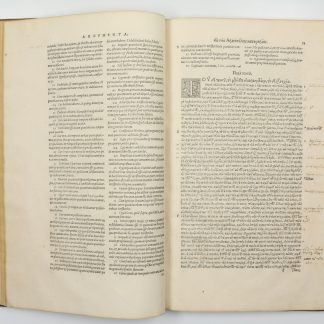