Comprehensive correspondence with the Stuttgart (later Dusseldorf) concertmaster Reinhold Rohlfs-Zoll, who discusses private requests as well as conducting requests, or illuminates Krauss' role as artistic director of various theaters. In his letter from March 1922, Krauss reports enthusiastically that he conducted Wagner's "Rheingold" and "Die Walküre", and Strauss's "Rosenkavalier" so successfully at the Vienna State Opera that he was offered y contract for Austro-Hungarian Kronen 5,000,000.00 per year and an official lodgings in the Hofburg. In June 1924 he reports from a serious conversation with Richard Strauss, and nearly 20 years later he gives an account of the premiere of Strauss's last opera "Capriccio" for which Krauss has co-written the libretto.

Accompanied by 9 portraits and portrait postcards (7 undescribed, and 2 inscribed). 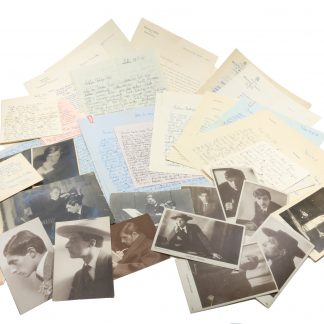