Grazie, Jeevesiano: the mutual education of master and servant

First editions: two rare Italian Renaissance treatises about prudent household management, including the role and treatment of family and servants, directed at the paterfamilias and couched in the form of dialogues. "Though the first treatises of this type appeared in the 16th century, penned by humanists, their production intensified after 1550, when they also acquired a different and broader meaning [...] While in the first examples of the genre the household was perceived as a metaphor for the health of the polity, in the following century a well-regulated household became an indication of the noble quality of its master and an expression of civilized behaviour" (Cavallo/Storey, Healthy Living in Late Renaissance Italy [OUP, 2013], p. 42). Above all, books of the "oeconomica" genre aimed to "define the responsibilities of each member of the family and household - husband, wife, children, and different ranks of servants - and how they should behave towards one another. Special attention is also given to manners and attitudes appropriate to the social standing, age, and gender [...], but they also contain practical advice on how to make a house salubrious by orienting the building correctly as regards sun and wind, and through the layout and size of the rooms and windows" (ibid., p. 43). Caggio's treatise not only includes such architectural considerations (cf. fol. 57f.), but generally provides an uncommonly detailed window into the familial mores of his native Palermo during the mid-16th century, frequently betraying the pervasive misogyny of Sicilian society: the two-page table of contents promises answers to problems such as, "Why did nature make men robust and valorous and women weak and of little spirit", and further along gives advice on, "What damages are caused by wives who are pompous, proud, and domineering".

The 1549 treatise by Rosello, a Padovan cleric frequently at odds with the censorship of his church, contains two dialogues. The first develops the subject of the mutual education of master and servant, demonstrating that the latter will show all the more "prudentia, modestia, gentilezza, & costumi civili" (fol. 13r) if the master is indulgent and forbearing toward him. The second notoriously portrays life at court as an anarchic war of all against all in which the courtier, lacking a specific professional or classical education, must continually adapt to circumstances like a chameleon (cf. M. Hinz, Rhetorische Strategien des Hofmannes [1992], p. 239).

Binding rather severely rubbed, extremeties bumped; book's contents inscribed on upper cover. Interior shows occasional weak waterstains. Several old annotations to endpapers and title-page (some in Italian); a cipher alphabet is inscribed to the lower endpaper. Provenance: from the collection of the historian and director of the Viennese court library, Sebastian Tengnagel (1563-1636), who willed his large private library to the Emperor in 1633 (cf. Alphons Lhotsky, Die Wiener Palatina und die Geschichtsforschung unter Sebastian Tengnagel, in: Aufsätze und Vorträge III [1972], p. 242ff.). His autograph ownership is on the title-page: "Ex lib. Sebast. Tengnagel I.V.D. et Caes. Biblioth.", and it is possible that the cipher alphabet is also written by him. The pastedown shows the later bookplate of the library of Pfannberg castle in Styria, the collection of the Austrian industrialist Baron Franz Mayr von Melnhof (1810-89). 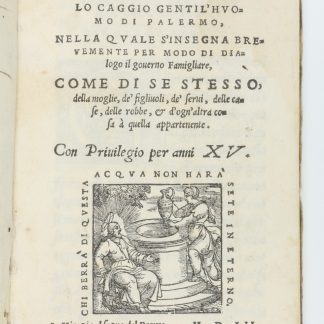